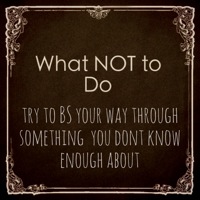 What NOT to Do: BS your reader

[dropcap]D[/dropcap]ON’T try to get by with a passing knowledge of something just because you think you know enough about it to voice any kind of opinion.

Authors aren’t expected to be experts in everything they write about, but if you’re going to BS something, make sure you aren’t BSing it into something that could come back to bite you. That means don’t make an opinion, a judgment, or a big deal about something you aren’t familiar enough with to have a meaningful opinion about. Inevitably a reader will know you don’t know what you’re talking about and will put your book down. Some choice words for you will likely spew forth too. Those that don’t know any more than you won’t notice it. But those that do will most certainly shout it to the winds. Then those that didn’t know soon will. You will not feel good about it, especially when it’s so easily avoided.

DO remember to KISS. Keep It Simple Stupid is the only way to avoid stepping in it if you aren’t going to research your facts. Reference what you don’t know about in a vague way, and don’t say anything that has the potential to be flat-out wrong.

DO get a second and third opinion on anything that might be even remotely offensive. You should be able to recognize these things on your own, although sometimes we lose sight of it, because we’re trying to convey something that seems reasonably done to us. We feel that way because we know what we mean. What we mean doesn’t always make it on the page though. If you have any topics at all that might be offensive, make sure you ask someone to take a look for you. These topics may include mental illness and disabilities, racial slurs or racial undertones, sexism—any -ism really—or stereotypical behavior. If you find yourself making an Irishman drunk and feisty all the time, it may not seem like a bad thing to you. But there’s a good chance it might be an overdone stereotype that will bite you in hoo-ha, so give it a test run.

DO make sure what you write is accurate. If you’re making a judgment about a political climate you were still in diapers for, then talk to someone that actually lived through it. If it’s too far back, then do some simple research. It might be something as little as your wording. Maybe you meant one thing but said something entirely different because you didn’t quite have enough of a grasp on the concept to get it right. Or it could be something disastrously obtuse, and you have no clue you were being obtuse. Either way, you don’t want to be that writer. A little research can give you enough information to write it as if you do know without getting specific. Specificity is where these things can really backfire. Your research should be commensurate to the amount of specificity you need. If you need to get more specific, do a lot more research. Equally, if you need to understand something to make it work in your story, even if the specifics aren’t written, then you still need to do your research.

None of this means that you don’t get to take literary license or touch upon taboo subjects. You can certainly write a story about a drunk and feisty Irishman. You don’t have to understand physics to use it in your story. You don’t have to be a war vet to have one as a character. It doesn’t need to take a lot to make those things work. Awareness and research will go a long way toward your emotional well-being, and you’ll be glad you did it.

What NOT to Do: Spam query a freelance editor
Fave O' The Day! #amwriting
Computers Can Bleed
editing editor What Not to Do writer writing writing tips

What NOT to Do: Spam query a freelance editor